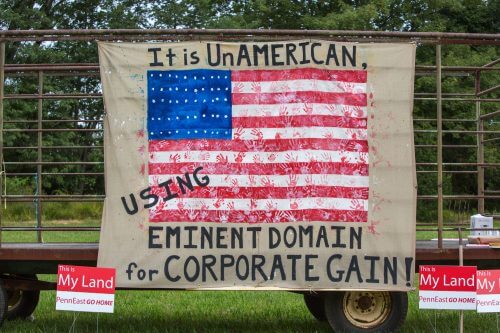 Opponents of the PennEast pipeline decried a decision today from Judge Brian Martinotti of the U.S. District Court in Trenton to grant the proposed pipeline full eminent domain rights to nearly 150 properties in New Jersey for a pipeline that might never get built. This is the first time state preserved lands have ever been condemned since the NJ Natural Lands Trust was established in 1969.

“Today’s ruling favored private interests over the public good by letting PennEast — owned in part by New Jersey Resources and South Jersey Industries — seize nearly 150 private and preserved lands for its ill-advised pipeline before the State of New Jersey has decided whether it will even be approved,” said Tom Gilbert, campaign director, New Jersey Conservation Foundation (NJ Conservation). “We will continue the fight to protect our land, water, and communities from this unneeded, damaging project.”

“PennEast is trying to trample on our rights by taking land from private homeowners, and lands set aside with taxpayer dollars for our children and grandchildren. This will only strengthen the public’s opposition and resolve to ensure that this self-serving project is rejected and they never get the chance to destroy New Jersey’s environment,” continued Gilbert.

“We are really disappointed that the court felt that its hands were tied, and had no choice but to allow PennEast to condemn these lands. We continue to believe that PennEast is not entitled to permanently seize lands at this stage, and are considering our legal options,” said Jennifer Danis, senior staff attorney, Columbia University Environmental Law Clinic.

“Allowing a private company to seize preserved lands that are held in the public trust as well as privately-owned land for a pipeline that may never be built tears at the faith and trust we have placed in our legal system. For these open spaces and farms that were preserved with taxpayer support for environmental and agricultural purposes to be condemned for a pipeline that has no water permit approvals is an egregious abuse of condemnation power,” said Patricia Ruby, Executive Director, Hunterdon Land Trust.

The New Jersey Attorney General called on the court to reject PennEast’s demand to condemn more than 20 parcels of state-owned open space and farmland that were preserved with taxpayer dollars. PennEast had asked the court to give the company title and immediate access to property the company contends is needed to build its proposed gas pipeline — even though PennEast does not have authorization to build its project.

The state argued that PennEast’s request for the rights to build on the “preciously scarce” preserved lands the state owns and manages was overly broad, that the federal court lacks jurisdiction over the state, and that harm to the state’s 60-year open space program would be “irreparable” if PennEast’s request is granted.

“We appreciate the efforts of the Attorney General’s office to defend state lands that were set aside for the public, not pipeline developers,” Gilbert said.

PennEast was seeking to seize 149 of the 211 properties in the path of the proposed pipeline in New Jersey — nearly 70 percent. Out of 149 properties that would be condemned, about 50 are preserved lands, more than 20 of which the state owns in whole or in part.