“This is a great victory for the communities, organizations and
elected officials that fought this unneeded, polluting project for years.”

How close is your home, school, or playground to the proposed PennEast pipeline route? Use this interactive map to find out.

(Click on + repeatedly until you see your location. You will have to reposition the map as you click to stay on the route.)

The PennEast Pipeline Company, LLC, proposes to construct a 118-mile natural gas pipeline from Pennsylvania through towns in Mercer and Hunterdon counties in New Jersey.

PennEast is a partnership that includes the following companies:

The PennEast pipeline would threaten the health and safety of our communities, private landowners, taxpayer-preserved open space, our drinking water, and significant natural and historic resources. 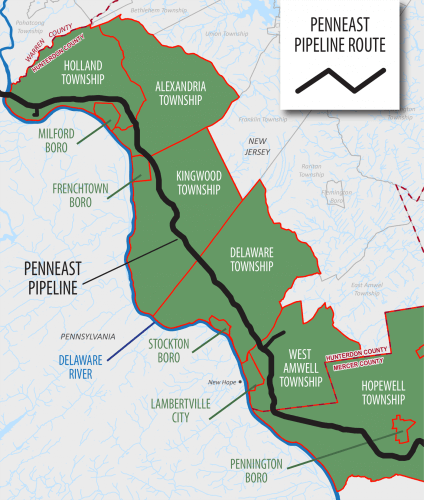 The proposed PennEast pipeline has been described as “a solution in search of a problem.” Data and analysis show the pipeline isn’t necessary to meet demand, reduce natural gas prices, or ensure a reliable, low-cost transition to a clean energy future.

Crossing the Delaware River and more than 4,300 acres of preserved lands in New Jersey, the pipeline will threaten significant natural and historic resources. It would damage scores of pristine, protected streams and jeopardize populations of threatened and endangered species such as long-tailed salamanders.

PennEast would bring an additional one billion cubic feet per day of fracked gas into Hunterdon and Mercer counties, adding to at least 1.3 billion cubic feet of excess capacity already serving New Jersey’s needs. The project would condemn nearly 150 private properties and public open spaces, all for a project that New Jersey’s utility consumer watchdog called “unneeded” and “unfair to ratepayers” who would foot the bill.

New Jersey currently has substantial excess pipeline capacity to meet its needs — even during extreme cold periods — and PennEast would add to this capacity unnecessarily. By creating a further glut in capacity, PennEast would increase costs to New Jersey consumers by $180 million to $280 million per year.

PennEast is opposed by every New Jersey municipality in its path, as well as many federal, state, and local elected officials. PennEast significantly overstated the number of total jobs it would create “by approximately two-thirds or more,” one study found.

A recent economic impact analysis presented to the New Jersey Conservation Foundation found that the number of jobs PennEast claims its pipeline would create was significantly overstated. The report also noted that “half or more” of the jobs would go to workers who live outside New Jersey and Pennsylvania, and only 10 permanent jobs would be created in New Jersey.

Despite the pipeline not being approved, PennEast developers are seizing land from New Jersey homeowners via eminent domain.

How does natural gas affect the environment? The proposed PennEast pipeline would have a devastating and
lasting effect on our land, water, forests and wildlife.

PennEast plans to cut costs on pipeline safety. The New Jersey Board of Public Utilities (BPU) determined that the federal pipeline safety statutes do not provide an adequate level of safety for the public. As a result, they have enacted far more stringent rules in the state to help prevent pipeline accidents, requiring that thicker Class 4 pipeline be used.

Preserved lands are often targeted for linear developments like pipelines, as they provide the least expensive routes.

“The PennEast pipeline threatens waterways, farmland, open space, and private land in one of the most beautiful natural areas of New Jersey, with no clear demonstration of economic need for our state. I strongly oppose its construction, and as a member of Congress I will support tightening the rules that allow such pipelines to be approved in the first place.”

“This pipeline is terrible. This one has to be stopped.”

Despite not being approved, PennEast developers are attempting to seize land rights from New Jersey landowners via eminent domain.

Attempting to land-grab nearly 70 percent of the properties in the pipeline’s proposed path in New Jersey means threatening approximately 50 taxpayer-preserved properties, of which the state owns more than 20. Legal challenges to this threat on behalf of New Jersey Conservation Foundation and new Jersey’s Attorney General make a case that PennEast should not be allowed to seize land for a pipeline that might never get built.

The proposed PennEast pipeline would have devastating and permanent effects on our land, water, forests, and wildlife. Potential damage includes:

Because New Jersey is the most densely populated state in the nation, it determined that the federal pipeline safety regulations do not provide an adequate level of safety for the public. The New Jersey Board of Public Utilities (BPU) enacted far more stringent rules in the state nearly a decade ago, including requirements that thicker, Class 4 pipeline be used in all locations.

PennEast is not subject to these BPU rules because it’s an interstate pipeline. Developers of the proposed project announced that they plan to build a thinner Class 2 pipe rather than the safer Class 4. With a thinner pipe wall comes higher pressures and fewer inspections than New Jersey laws require.  Pipelines like PennEast — which has eight New Jersey schools in its path — would be built and operated along much of its route at only half of New Jersey’s safety standards.

How close are you to the PennEast pipeline blast zone?

Interstate pipelines have especially high impact consequence areas, as they are larger and under high pressure. If you are within 1,500 feet of a ruptured and ignited pipeline, you have about 40 seconds before you suffer blister burns from radiant heat. Even worse, if you are within 750 feet, you will have about 30 seconds before you face a 50 percent chance of death. 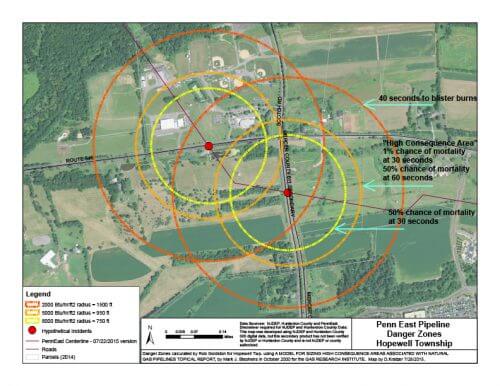 PennEast has targeted lands that were permanently preserved by the taxpayers of New Jersey for the public to enjoy as open and recreational space. If PennEast has its way, it would mark the first time in the history of the New Jersey Natural Lands Trust, established in 1968, that preserved land has been condemned through eminent domain.

The PennEast project would cause significant and irremediable damage to valuable and irreplaceable resources of cultural, historic, and archaeological value, as well as farmland.