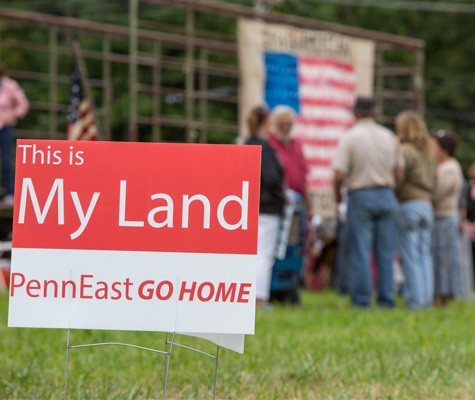 “PennEast has ceased all further development of the Project,” the company said in a statement that cited lack of necessary permits as the reason.

Environmental advocates, residents, and federal, state and local government officials combatted the unneeded pipeline for seven years. The company’s decision came three months after a ruling from the U.S. Supreme Court affirming PennEast’s right to condemn state-owned land to build the pipeline. But without permits from state authorities to build the pipeline in areas protected by New Jersey’s stringent environmental regulations under the Clean Water Act, the Court ruling was not enough to salvage the project.

“This is a great victory for the communities, organizations and elected officials that fought this unneeded, polluting project for years,” said Tom Gilbert, campaign director for New Jersey Conservation Foundation and ReThink Energy NJ. “Our public and private lands won’t be seized and scarred, and our water and air won’t be polluted. New Jersey stayed strong and will be healthier and safer without PennEast. Fossil fuel projects such as this have no place as we transition to a clean energy future.”

The project faced tremendous opposition from affected landowners and communities, and a series of legal challenges from the State of New Jersey, New Jersey Conservation Foundation, the Watershed Institute, HALT PennEast and the Delaware Riverkeeper Network.

Click to tweet: PennEast cancels pipeline project: “New Jersey stayed strong and will be healthier and safer without PennEast. Fossil fuel projects such as this have no place as we transition to a clean energy future.” —@2TomGilbert, @rethinkenergynj http://ow.ly/4uKy50Ghhva #StopPennEast

“We battled this self-dealing project at every turn with economic data and science showing why PennEast would harm New Jersey ratepayers and its environment,” said Jennifer Danis, senior fellow at Columbia University Law School’s Sabin Center for Climate Change Law. “PennEast’s cancelation should send a strong signal to other proposed but unneeded gas infrastructure projects: We stand ready to fight for our right to a clean and just transition to renewable energy.”

“I’m grateful for all of the work that has been accomplished by the advocacy groups on the ground these last years, fighting this unnecessary and dangerous proposal. I also thank the residents and communities on the front line of the proposed route for their tireless efforts,” said Rep. Bonnie Watson-Coleman. “My work is not done. I will continue to commit to this fight for comprehensive oversight by FERC. We must have accountability when it comes to proposed projects and take a cumulative approach of the need and the environmental impact when pipelines are put forth into consideration. Make no mistake though, today is a great win.”

“Today we celebrate a major victory for landowners, for the environment, and for the dedicated advocates who have spent years fighting the destructive and unnecessary PennEast pipeline — our hard work paid off,” said Rep. Tom Malinowski. “Through litigation, legislation, and enforcement of environmental rules, we mustered a force that could not be resisted. I hope that the affected landowners will finally enjoy the peace of mind they deserve, and the satisfaction of knowing that when local communities come together to protect their rights, they can still beat corporate power.”

“We have been opposed to this unneeded PennEast project since day one. This decision is a victory for all New Jerseyans who want to breathe clean air. We congratulate the homeowners, environmental activists, local officials, and the Murphy Administration for their tireless efforts to stop this project. The PennEast pipeline is not needed and would threaten the health and safety of local communities and our state,” said Ed Potosnak, executive director, New Jersey LCV. “We look forward to a future based on clean renewable energy that moves us away from dirty methane gas, and that will provide good local-union jobs and preserve our beautiful state for our children and grandchildren.”

“Who says a small community of committed homeowners and their allies can’t overcome the massive force of five billion-dollar energy companies, the Federal Energy Regulatory Commission and the U.S. Supreme Court?” said Vince DiBianca, a founder of HALT PennEast (Homeowners Against Land Taking). “Homeowners are deeply grateful to the New Jersey Conservation Foundation, the State of New Jersey and the Delaware Riverkeeper Network.  Chalk-up a heartwarming win to people and the planet!”

“Today, water, the environment and people spoke louder than fossil fuels,” said Jim Waltman, the Watershed’s executive director. “The Watershed Institute congratulates and thanks the many local, state, and federal officials of both parties and thousands of residents for their determined opposition to this unnecessary and destructive proposal.”

“PennEast’s cancelation of this unneeded, dangerous fracked gas pipeline is a momentous win for the communities that have fought hard for years to defend their property and the environment,” said Joseph Otis Minott, Clean Air Council executive director and chief counsel. “Others who seek to exploit the residents and natural resources of New Jersey and Pennsylvania should take note:  we are not easy-take states and we will continue to resist.”

“My children and I are overcome with sheer joy and gratitude that the fight against the PennEast Pipeline is finally over!” said Jaqueline Evans, a landowner whose home was threatened by the pipeline route. “For the past seven years we have fought this unneeded and unwanted pipeline that has threatened the state of New Jersey and the towns on the proposed line. We protected our children, their future, our land, pristine C1 streams, endangered wildlife species, our local economy, history.”

“We are grateful to our many partners in this long fight,” said Michele Byers, executive director, New Jersey Conservation Foundation. “This has been a top priority of our organization over the past six years. We simply could not allow this unneeded pipeline to take and damage the lands that we and others worked so hard to preserve for future generations.”