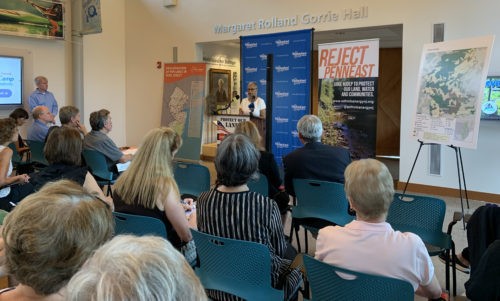 Pennington, NJ (August 13, 2019) – Opponents of the proposed PennEast pipeline today called on the state Department of Environmental Protection (NJDEP) to conduct the stringent environmental review required under state law and regulations, and to deny permits for an unneeded fossil fuel pipeline that would damage protected streams and critical wildlife habitat.

Elected officials, owners of property along the proposed pipeline route, citizen groups, and others gathered at The Watershed Institute in response to PennEast submitting a new application for environmental permits last week to NJDEP.

“Nothing is more urgent than the preservation of our environment. The failure to demonstrate the necessity of this pipeline is a real threat to that priority,” said U.S. Rep. Bonnie Watson Coleman. “Expert after expert has concluded that PennEast is not needed. It will cost ratepayers more and cause permanent harm to our air, land and water. We urge the DEP to uphold their environmental standards to protect our natural resources and irreplaceable drinking water from this project.”

“I have met with landowners up and down the route the PennEast pipeline would take. I have seen the farms and open space it would ruin, and the water it would pollute. There is no economic need in New Jersey for this pipeline, and I will continue to fight hard in Congress to oppose its construction,” said U.S. Rep. Tom Malinowski.

“The Trump Administration conditionally approved this unneeded fossil fuel project as expected,” said Tom Gilbert campaign director for ReThink Energy NJ and New Jersey Conservation Foundation. “But NJDEP will have the final say, and the law and science are on our side. This project simply can’t meet New Jersey’s strict environmental standards and must be rejected.”

“The choice between investing in dirty fossil fuel energy capacity that we don’t need and protecting the precious supply of water that New Jersey does need is no choice at all,” said Jim Waltman, executive director of The Watershed Institute. “We urge DEP to enforce our clean water laws, say no to PennEast, and prevent damage to waterways, wetlands, and other environmental resources that could never be undone.”

Several other elected officials either attended or provided statements.

“The threat that the PennEast pipeline poses to our water is too great to ignore. NJDEP should reject the application and end the threat once and for all,” said State Sen. Kip Bateman in a statement.

“It’s time for NJDEP to do what the federal government should have done: stop the unnecessary PennEast pipeline,” said State Sen. Shirley Turner in a statement.

“This very important environmental challenge is now in the hands of the decision makers from the State of New Jersey. We look forward to the right course of action being taken to protect our environment for our current residents and future generations to come,” said Assemblywoman Verlina Reynolds-Jackson in a statement.

“The people of Hopewell deal with this issue at ground-level and they are justifiably angry that the federal government said yes to this project. We call on NJDEP to say no,” said Hopewell Township Mayor Kristin McLaughlin.

The Federal Energy Regulatory Commission (FERC) last year rubber-stamped approval for the pipeline based on an application that had no real environmental information. But the pipeline — which would carry natural gas from Pennsylvania fracking sites through Hunterdon and Mercer counties in New Jersey — can’t be built without approval of the NJDEP, which is charged with enforcing wetlands laws and water-quality standards. NJDEP rejected a premature permit application for the same project last year on grounds that PennEast failed to submit all required information.

Since the pipeline was proposed, it has drawn bipartisan opposition from New Jersey local, state, and federal elected officials and galvanized grassroots opposition. Numerous studies have shown that New Jersey’s supply of natural gas is more than enough to meet existing and future needs, and that the project would cause serious harm to the environment, public health and safety. The New Jersey Rate Counsel, watchdog agency for New Jersey utility consumers, has called the project “unneeded” and an effort by gas utilities to sell gas to themselves and make profits at a level “tantamount to winning the lottery.”

Vince and Patty DiBianca, affected homeowners who operate a family business on their Delaware Township property, said, “Our community group of 1,400 impacted homeowners, neighbors and allies, Homeowners Against Land Taking, will ensure that authorities like NJDEP can do their job fully by having homeowner voices heard and offering on-the-ground data citing the damage this unneeded pipeline would cause to our land.”

Homeowners TC and Joe Buchanan, a retired couple whose family has owned their Stockton home and small farm for generations, said, “An NJDEP denial would stop the pipeline from being built, preventing PennEast from totally destroying our fruit tree orchard.”

Photos from the event can be found here.

ReThink Energy NJ is a nonprofit organization created in 2015 by the New Jersey Conservation Foundation, The Watershed Institute, and the Pinelands Preservation Alliance in response to the onslaught of new fossil fuel projects proposed for the state. ReThink informs and empowers New Jersey citizens and decision-makers to support a rapid transition away from reliance on fossil fuels and unneeded pipelines, to clean, efficient, renewable energy like wind and solar. To learn more, visit rethinkenergynj.org.