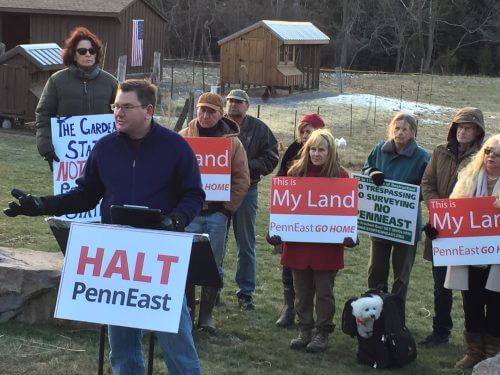 Yesterday, FERC responded to multiple re-hearing requests on its conditional approval of the proposed PennEast pipeline.

FERC’s letter did not grant the re-hearing requests. Instead, the evasive letter attempted to grant FERC indefinite time to respond to the requests. In other pipeline cases, this delay tactic has resulted in FERC’s response arriving too late to stop the pipeline.

“Unfortunately, FERC is attempting to delay any consideration of the many serious challenges that were filed against its flawed, conditional approval of PennEast, through a procedural maneuver called a ‘tolling order,’ ” said Tom Gilbert, campaign director, New Jersey Conservation Foundation. “FERC’s refusal to consider these re-hearing requests in a timely manner violates their responsibility and abuses the public interest.”

“PennEast has created an unusually high level of opposition across a wide spectrum of interests — from private landowners, non-profits, elected officials and state agencies — because the pipeline simply isn’t needed. And one thing people can agree on is that the environment shouldn’t be damaged for private projects that yield no public benefit,” said Jennifer Danis of Eastern Environmental Law Center. “PennEast is the epitome of what is wrong with the existing FERC process, a process that FERC itself has admitted needs to change. We will vigorously defend our water, air and lands against this polluting project.”

Danis added, “FERC is playing fast and loose with its statutory authority, and we believe that the courts should step in to clarify that FERC can’t indefinitely extend its deadline — particularly when private property rights are at stake.”

In the past week, FERC received re-hearing requests from, but not limited to: