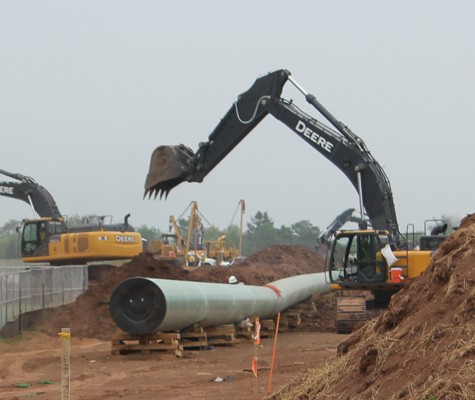 TRENTON, NJ (June 13, 2019) — Development of natural gas pipelines and associated infrastructure is resulting in significant costs to the environment and communities in the Delaware River Basin (DRB), a new study conducted for the New Jersey Conservation Foundation finds. The costs that can be quantified could be as much as $2.4 billion for two pipelines alone — in addition to costs that can’t yet be quantified.

“Such costs should not be overlooked when making decisions about pipeline development in the region,” the report says.

The far-reaching analysis, “Environmental and Social Costs of Natural Gas Pipeline Development in the Delaware River Basin,” was conducted by The Cadmus Group LLC, an independent technical consultancy based in Massachusetts. It focuses on the proposed PennEast, and existing Mariner East 2, and Mariner East 2X pipelines, two of the numerous pipelines threatening the basin. Spanning portions of New York, New Jersey, Pennsylvania, and Delaware, the Basin covers 42 counties and 838 municipalities. It is home to a wide variety of land uses and provides drinking water to more than 15 million people.

Click to Tweet: Development of natural gas pipelines and associated infrastructure for Mariner East 2 and PennEast pipelines could result in as much as $2.4B in costs to the environment and communities in the Delaware River Basin. ow.ly/qb0C50uDjuc #StopPennEast @ConserveNJ @ReThinkEnergyNJ

“No one has ever put all these numbers in one place,” said Tom Gilbert, New Jersey Conservation Foundation campaign director for energy, climate, and natural resources, “and doing so tells a powerful story of the magnitude of harm our region faces from pipelines.”

Quantifiable costs include loss of ecosystem services from land-cover changes in the pipeline right of way, greenhouse gas emissions that would result from construction and long-term operation of the PennEast pipeline and from the long-term operation of the two Mariner East pipelines, lost recreation days resulting from pipeline construction, and lost investment in  lands protected through public acquisition or conservation easements that will be cleared to build the pipelines.

“We’ve been misled by PennEast about how many jobs this pipeline would create. This report confirms my belief that renewable energy projects, such as the solar project at Mercer County Community College, would generate even more construction opportunities and other jobs than would pipelines, said Mercer County Executive Brian Hughes.

Very real, important costs that could not be monetized or estimated include water quality degradation and treatment or procurement of new sources, stream quality and aquatic habitat degradation, loss of property value, and such construction disruptions as noise, vibrations, and aesthetics.

“This new report lays to rest any argument that PennEast would benefit the people of New Jersey or Pennsylvania,” said Joseph Otis Minott, Executive Director and Chief Counsel of Clean Air Council. “As we’ve learned from the horrific impacts of Mariner East, the costs to our land, water, health, and economy far outweigh the corporate profit from these pipeline projects.”

Among the key findings:

The report also includes an analysis of job creation that undermines claims from PennEast that its proposed pipeline would provide a big boost for working people. Even using a relatively high jobs factor, the new report says that all forms of renewable energy — such as wind and solar — or energy conserving options evaluated would be expected to create more jobs than PennEast — from 2,744 to 13,719 additional jobs for the same level of investment.

Click to Tweet: Development of natural gas pipelines and associated infrastructure for Mariner East 2 and PennEast pipelines could result in as much as $2.4B in costs to the environment and communities in the Delaware River Basin. ow.ly/qb0C50uDjuc #StopPennEast @ConserveNJ @ReThinkEnergyNJ