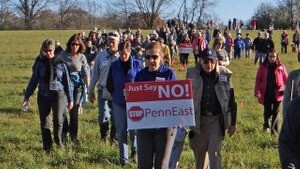 TRENTON, NJ (March 22, 2018) — The State of New Jersey reaffirmed its commitment to saving open space in a legal filing asking the U.S. District Court in Trenton to reject PennEast’s demand to condemn more than 20 parcels of state-owned open space and farmland that were preserved with taxpayer dollars. PennEast has asked the court to give it title and immediate access to property the company contends is needed to build its proposed gas pipeline. But, there is a catch — PennEast does not have authorization to build its project.

Despite the fact that its pipeline is not yet approved, and New Jersey has not determined whether the pipeline is in the public interest, PennEast continues its aggressive tactics against New Jersey landowners. The pipeline company asked the courts not only for the rights to access the properties along its route to survey the land, but also for the immediate right to condemn lands for the pipeline corridor.

The state argued that PennEast’s request for the rights to build on the “preciously scarce” preserved lands the state owns and manages was overly broad, that the federal court lacks jurisdiction over the state, and that harm to the state’s 60-year open space program would be “irreparable” if PennEast’s request is granted.

“The Attorney General stood on the side of New Jersey residents — and on the right side of history — when he took action to protect more than twenty irreplaceable state lands that PennEast is trying to seize through eminent domain,” said Tom Gilbert, campaign director, NJ Conservation. “The state didn’t preserve these open spaces and farmland with taxpayer support so a gas pipeline company could condemn them for private profits.”

“Just as the state reaffirmed, our goal is to protect these preserved lands and critical waterways,” said Patricia Ruby, executive director, HLT. “We have done so for decades and will continue to do so because PennEast cannot build its pipeline without jeopardizing the quality of life in and environmental integrity of this region. “PennEast’s proposal will permanently scar our cultural landscapes.”

“PennEast is asking the Court to put private interests over the public interest, but these non-profits and the State of New Jersey have spent significant funds preserving these lands for their critical environmental values, not to create a green path for a dirty pipeline,” said Jennifer Danis, senior staff attorney, EELC.

PennEast is seeking to seize 149 of the 211 properties in the path of the proposed pipeline in New Jersey — nearly 70%. Out of 149 properties that would be condemned, about 50 are preserved lands, more than 20 of which the state owns in whole or in part. The first 60 of the 149 eminent domain cases are being heard by the courts on April 5.