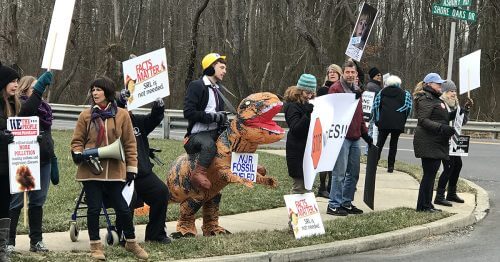 HOWELL, NJ (January 23, 2019) — Shareholders of New Jersey Resources Corporation (NYSE: NJR) were met by protesters outside the company’s annual meeting today. Carrying signs and raising their voices in opposition, New Jersey landowners and citizens made the case that NJR should end its involvement in two pipeline projects that aren’t needed and that take the state in the wrong direction for meeting energy needs.

NJR is one of the primary companies behind the proposed PennEast pipeline, which is currently using eminent domain to seize nearly 150 private properties and preserved land in New Jersey. The pipeline lacks state approval, without which the pipeline cannot be built.

“Putting profits ahead of residents’ rights and safety is no way to run a business. NJR should be ashamed of themselves for taking land from me and scores of other homeowners for an unneeded pipeline,” said Jacqueline Evans of Stockton, a homeowner in PennEast pipeline’s path.

“Running a pipeline through a fragile resource like the Pinelands defies logic and threatens health and safety,” said People Over Pipelines member Rita Romeu of Chesterfield, New Jersey, one of the towns affected by the proposed SRL pipeline. “NJ Resources needs to stop construction of this pipeline immediately.”

“Instead of investing in unneeded, unsafe and environmentally damaging pipelines, NJR should be developing clean, renewable sources of energy,” said Patty Cronheim, outreach coordinator, ReThink Energy NJ. “NJR needs to catch up with the state’s new direction to achieve 100% clean energy and abandon its plans for PennEast and SRL pipelines.”

Two-thirds of the state’s voters do not consider natural gas to be clean energy, an astounding 23-point increase since 2016, and more than half said New Jersey is moving too slowly to adopt renewable energy.

Photos from the event are available here.