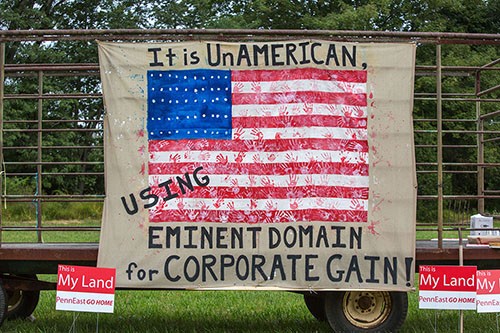 On Monday, September 20, the State of New Jersey submitted a letter to Third Circuit Court of the U.S. Court of Appeals stating it has reached an agreement in principle with the PennEast pipeline company that is seeking to abandon condemnation of 42 state lands for construction of an interstate gas pipeline. This announcement comes on the heels of PennEast taking the State of New Jersey all the way to the U.S. Supreme Court to defend its right to condemn these lands preserved by the state for public benefit.

“PennEast claims they aren’t abandoning the project, but actions speak louder than words, and this move clearly suggests the polluting pipeline won’t happen,” said Tom Gilbert, campaign director, New Jersey Conservation Foundation and ReThink Energy NJ. “The news that PennEast won’t move ahead with trying to condemn state lands to develop an unneeded fossil gas pipeline is a huge and welcome development. We applaud the Murphy Administration for successfully defending and preserving our public lands for future generations.”

“I welcome the news that PennEast is standing down from its attempt to seize state-owned land to build a destructive and unnecessary pipeline,” said U.S. Rep. Tom Malinowski. “This significant development is a major win for the environment and for our coalition of landowners, elected officials, and activist groups opposed to the pipeline. I thank the Murphy Administration for their efforts and I will continue to use every tool at my disposal to make sure, once and for all, that this pipeline is never built.”

The company abandoned similar condemnation suits to seize land in Pennsylvania in August. The dismissal of these condemnation suits is a strong indication that the project will not go ahead, since the pipeline can’t be built along the proposed route without these lands.