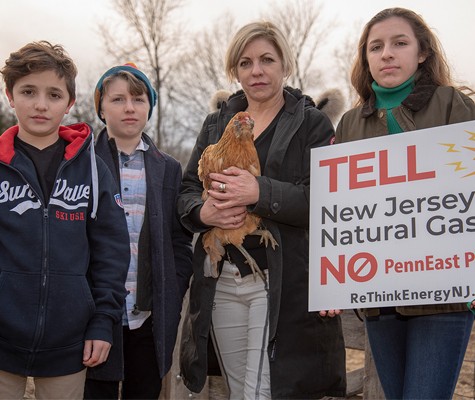 The press release proclaimed what sounded like an encouraging development: “South Jersey Industries to announce ambitious timeline to be carbon neutral by 2040.” But the average reader might have missed something important near the bottom of the release: “SJI Midstream houses the company’s interest in the PennEast Pipeline Project.”

Meanwhile, in a commentary appearing in a local news outlet, New Jersey Natural Gas President and CEO Stephen Westhoven presented a rosy — but inaccurate — picture of his company’s move away from dirty fossil fuels, failing to mention its parent company, New Jersey Resources, is behind the PennEast project and NJNG would receive fossil gas from the proposed pipeline. NJR makes similar claims on its website about the company’s commitment to sustainability.

Like other utility companies in New Jersey and elsewhere, SJI and NJR know fossil fuels are on the way out. Customers want safe, clean energy sources like wind and solar.

It’s hypocritical for companies claiming to embrace clean energy mandates to maintain financial interests in a pipeline that would bring New Jerseyans a billion cubic feet of fossil gas daily they don’t need and that would result in significant emissions of harmful greenhouse gas.

It’s like going to the store to buy a carton of cigarettes and a nicotine patch. Are you serious about quitting, or not?

PennEast is a proposed 116-mile pipeline from Pennsylvania fracking sites through towns in Hunterdon and Mercer counties. SJI and NJR have ownership stakes in the project and their affiliated companies (South Jersey Gas and NJNG) would also be customers taking delivery of gas through the pipeline.

Described as “a solution in search of a problem,” PennEast isn’t needed to meet demand, reduce natural gas prices, or ensure a reliable, low-cost transition to a clean energy future. Indeed, it would increase utility bills because the companies would pass the cost of the billion-dollar project along to their customers.

Sadly, the US Supreme Court recently upheld PennEast’s ability to use eminent domain to take preserved state lands in New Jersey. But the pipeline still faces high hurdles in its effort to obtain permits required under the state’s stringent laws and regulations protecting water quality and wetlands. And a federal court in Washington, DC is scrutinizing self-dealing contracts like those the companies behind PennEast have orchestrated, in one case overturning federal approval of a gas pipeline because such contracts don’t prove public need.

SJI and NJNG wouldn’t be the first companies wanting to have it both ways by planting one foot in the clean energy future and the other in the dirty energy past — and seeking an environmentally-sensitive public image in the process. It’s called “greenwashing” when a company misleads the public about its environmental practices.

It would be a lot easier to give SJI and NJNG credit if they’d just “come clean” — literally and figuratively. As laudable as the goal of being carbon neutral is, it’s inconsistent with building an environmentally destructive fossil fuel pipeline that would operate decades beyond the state’s planned transition away from gas.

And for what? To transport a dirty fossil fuel that NJNG and SJI claim to be abandoning, to supply a region that already has excessive pipeline capacity, even on the coldest days of the year when demand peaks?

NJNG also failed to mention that it’s nearly finished constructing the Southern Reliability Link, through the Pinelands National Reserve — home to forests, wetlands and wildlife habitat recognized internationally as a precious and fragile resource. More than a dozen drilling accidents occurred during construction of the pipeline — fouling streams and damaging one nearby resident’s home so severely that she had to abandon it. Does that sound like a green company to you?

If SJI and NJNG really want to be good corporate citizens and as green as their public relations campaigns tout, they’ll pull the plug on the unneeded, polluting PennEast pipeline.